If you’ve missed the story so far, this summer I went on an 11 night Disney Magic cruise. Leaving from Copenhagen, we then travelled to Oslo and Kristiansand before arriving at Stavanger Norway, our third and final port of call before heading to Iceland.

Our all ashore was at 7:30am and all aboard 12:45pm, making it our briefest port of call. We didn’t want to do the ship excursion to the famous Pulpit Rock as we prefer to do that sort of thing DIY and the short time in port made that too risky.

Instead we planned to find the cathedral and explore Gamle Stavanger. This compact port is perfect for cruisers who like to stay independent – we didn’t even have a map.

Stavanger Norway: A Step Back In Time 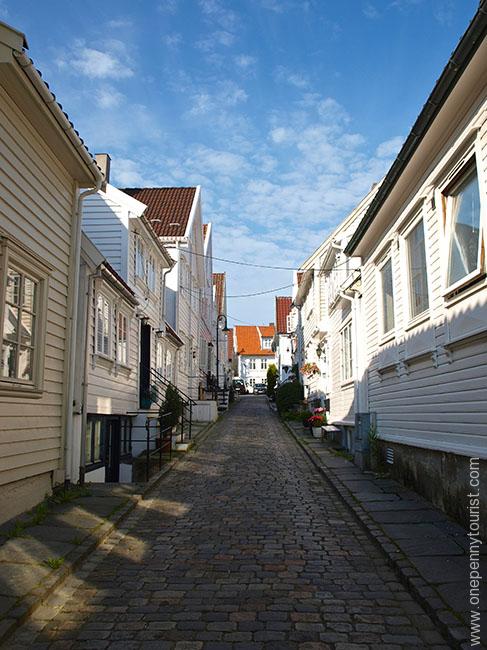 Heading in the direction of the Petroleum Museum required walking beside a fairly busy road so it wasn’t long before we diverted up a side street…to say the change of scenery was instant is an understatement – the exploration had begun. 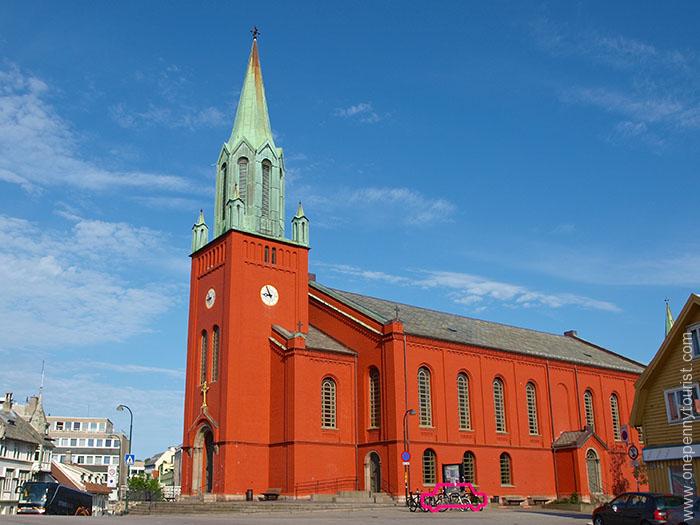 Just a few minutes walk and we stumbled upon this. No, despite looking so impressive, this is not the cathedral, but St Petri Kirke. Unsurprisingly this is also known as the red church. Equally unsurprising is that it’s a protected building. 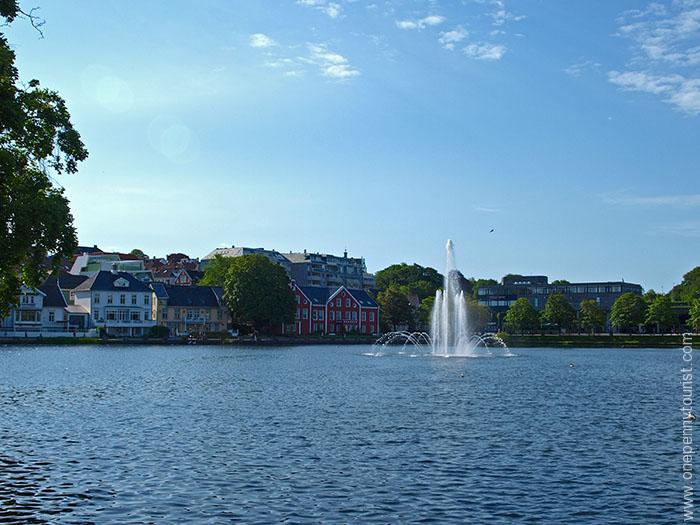 We kept walking as we sensed the park wasn’t far and sure enough, a few minutes later all was revealed. A mix of modern and traditional buildings surround the lake. 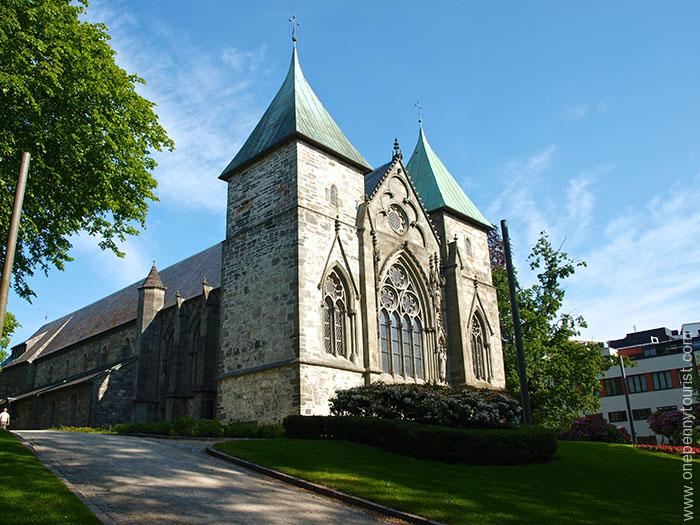 Stavanger Cathedral overlooks the park. An imposing stone building with a gothic feel and a long history. Yet after seeing St Petri Kirke, it seemed a bit of an anti-climax, though I may have felt differently if I’d encountered them in the opposite order. 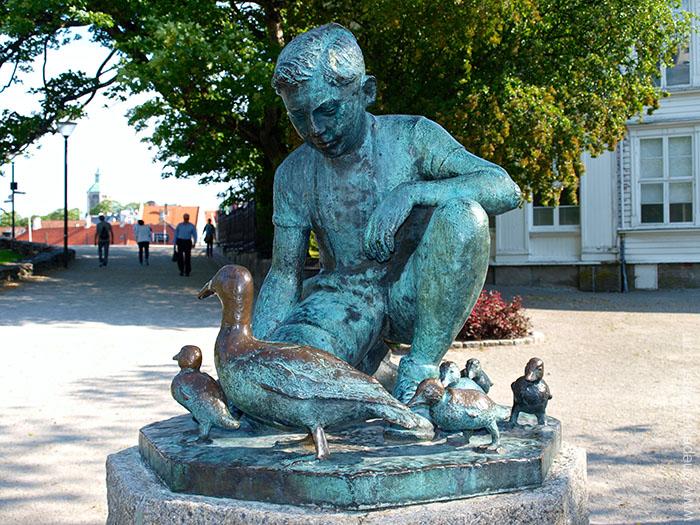 I loved all the statues dotted around the paths of the park, but this was my favourite. 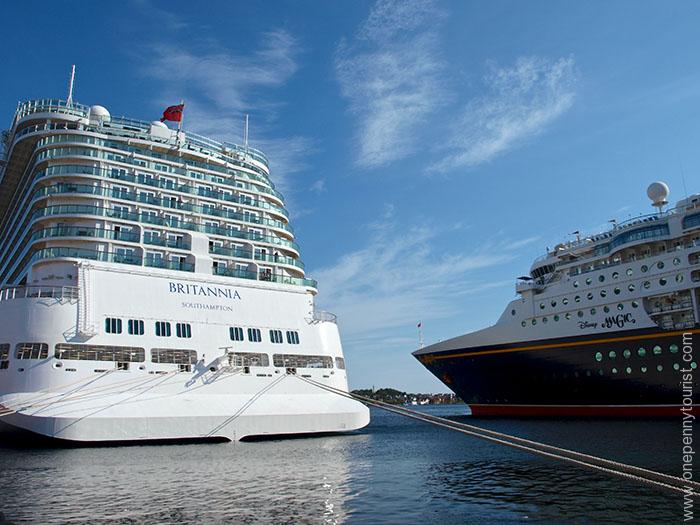 From there, 18th century Gamle Stavanger was just a few minutes walk away on the other side of the harbour. Did I mention how cosy this port is? Howdy neighbour! 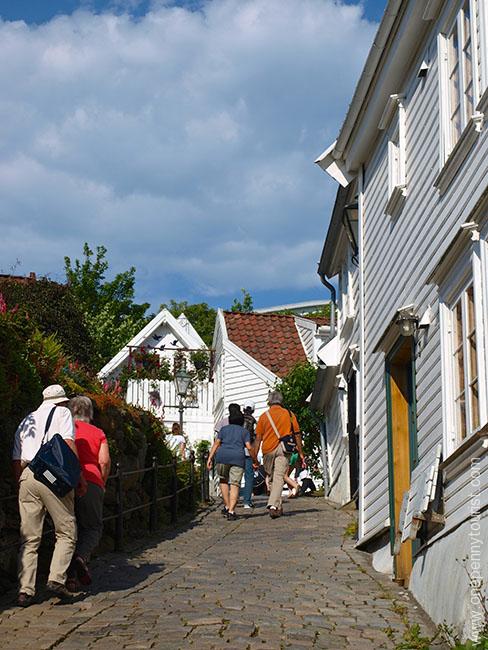 This whole area is set on a hillside and is a maze of narrow roads, traditional houses and pretty gardens. It’s genuinely lovely and quite peaceful, well apart from the hordes of tourists trekking around, hehe.

Which does bring me to something that bugged me a little. No, not Stavanger – some of the tourists 🙁 Yes, it’s obviously a big draw for visitors – but does that mean you’re entitled to press your faces up against people’s windows and look inside their home? 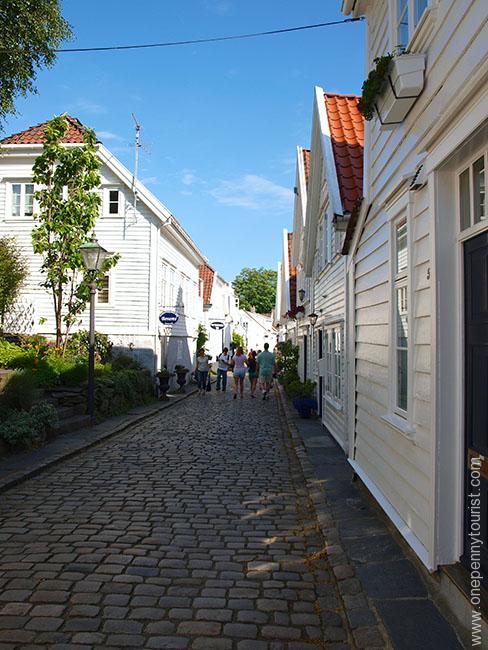 We found a little shop selling hand crafted pottery on one of these ‘main’ streets. Worth tracking down if you like that sort of thing (the owner was lovely to chat with too). 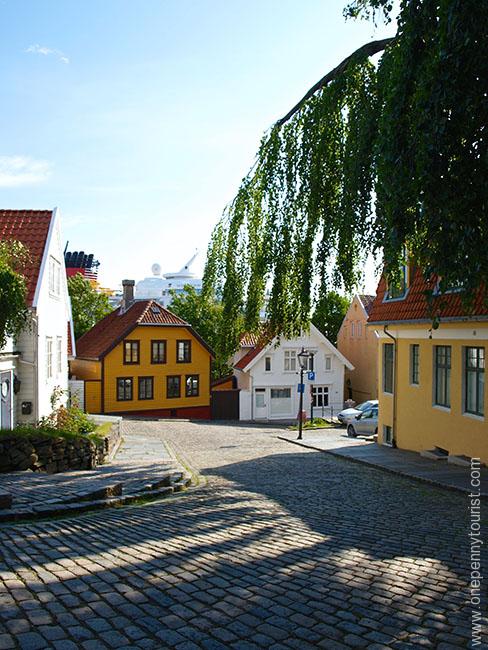 While most of the wooden houses in Gamle Stavanger are white, there are a few of the traditional orange ones are scattered around too. 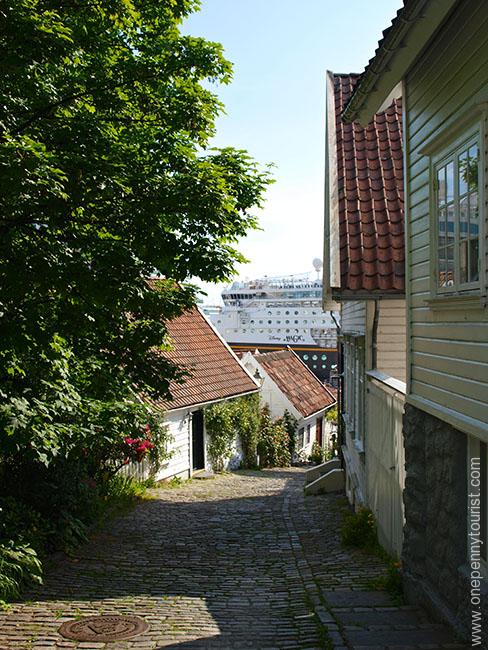 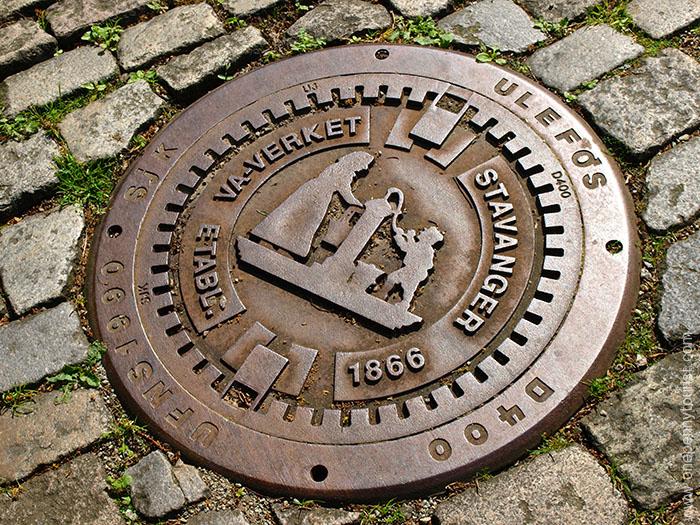 Obviously I had to take a photo of a manhole here too – I wouldn’t want Stavanger to feel left out in the battle of the Norwegian decorative manhole covers, hehe. 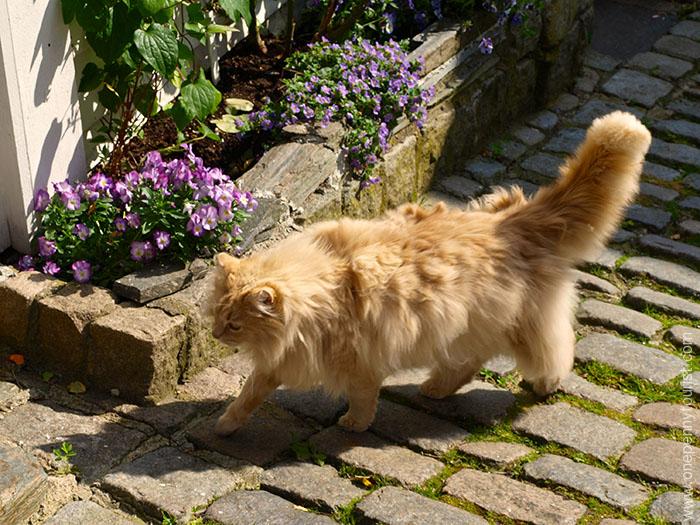 A very fluffy ginger kitty. It’s reassuring to know that no matter the country and no matter the language, cat’s universally consider human’s not worthy of their attention – we didn’t earn so much as a glance… 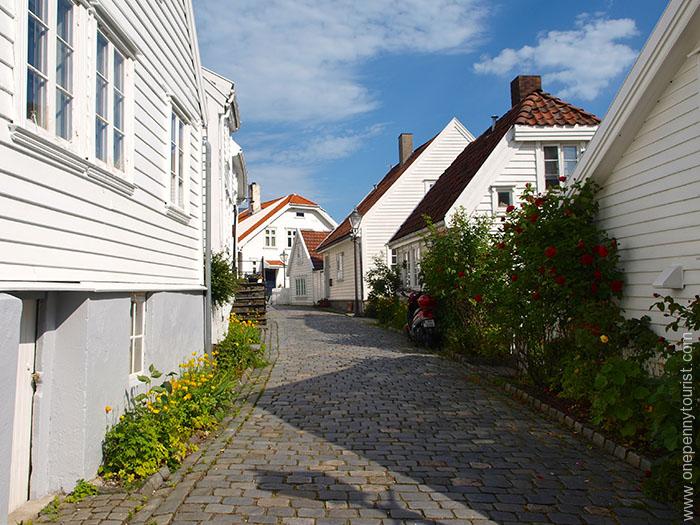 I could have taken photos all day and not get bored of these charming streets. 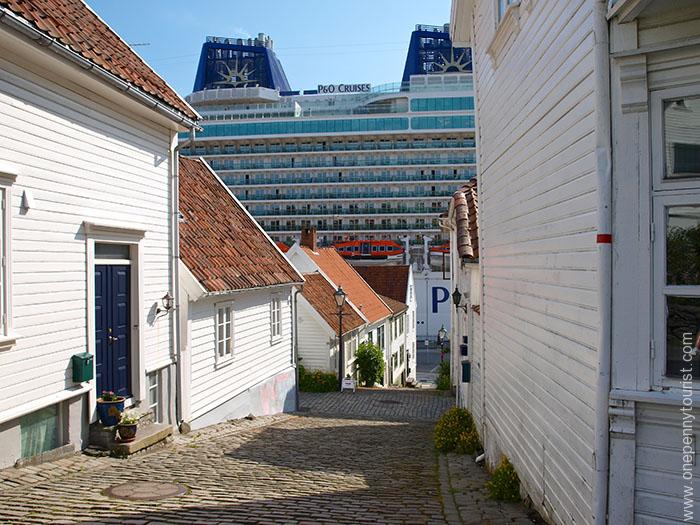 Ok, this time I can see someone else’s house from here, haha. This is a great photo if you’ve never been on a cruise before, as it gives you some idea of just how big these ships can be. They are often referred to as floating cities for a reason you know… 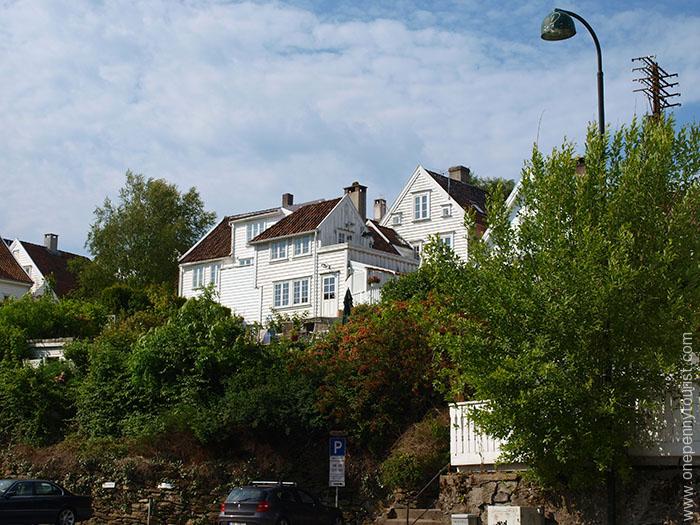 Farewell Gamle Stavanger – you were so gloriously picturesque.

Back around the harbour was one of the final places we wanted to visit. We’d left it until last due to it’s close proximity to the ship meaning if we were tight for time we’d not have far to walk. As it was, we had plenty of time to visit.

Valbergtårnet, or Valberg Tower, was a fireman’s watch tower. Amongst other things it was their job to warn Stavanger residents if a fire broke out. Probably a good idea in the old days with so many people burning real fires in all those wooden buildings! 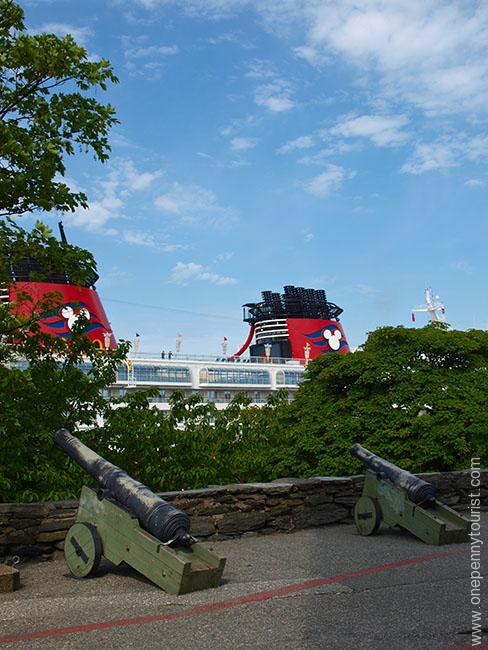 At the base of the tower were some cannons. Considering the tower was for firefighters, I’m not sure if these were used in the defence of Stavanger, but they look cool. I love this photo of the Disney Magic in the background; she looks closer than she actually was.

We didn’t do it, but for a small fee you can go up the tower to a museum. The tower isn’t very high though, so if looking for a good view it’s probably not worth it, especially as I’ve read comments that the old windows aren’t great for taking photo’s from.

After spending the last of our Kroner on a coffee in the sunshine and Norwegian chocolate (Am now addicted to Smash! Unfortunately I’ve not found anywhere to buy it in the UK, arggh) we returned to the ship for sail away.

Or so we thought – due to a bottleneck of passengers boarding the ship our sail away was delayed. But no worries, because it was a gorgeous sunny and warm day and I took the opportunity to grab a few more last minute photos before departure. 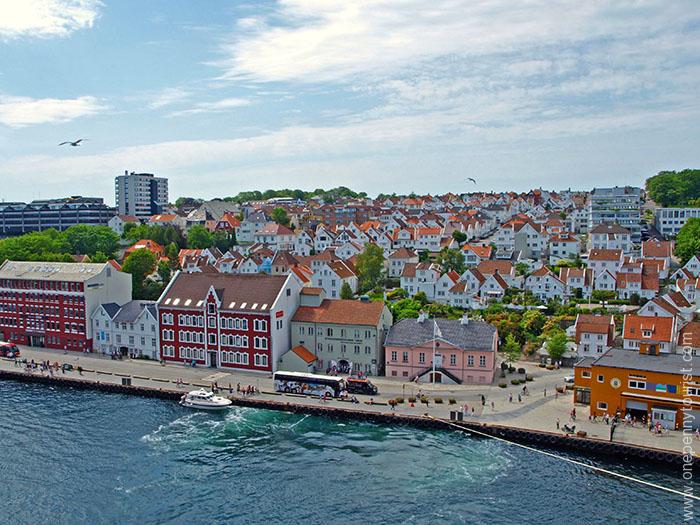 Our top deck view from the ship across the harbour and to Old Stavanger. 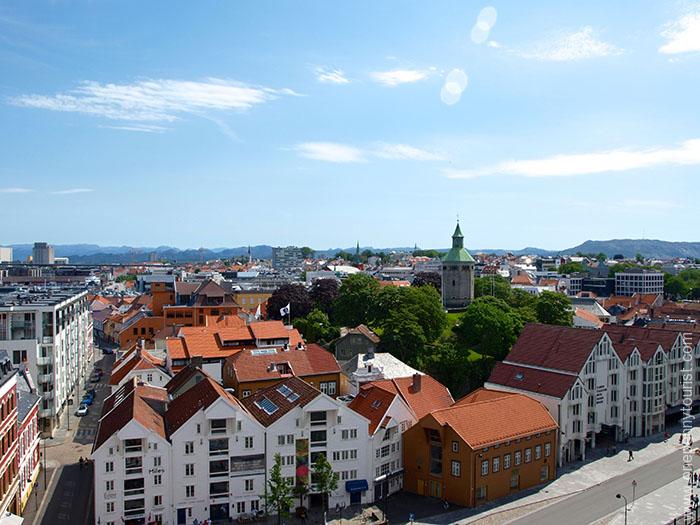 Looking across to the Valbergtårnet aka Valberg Tower. 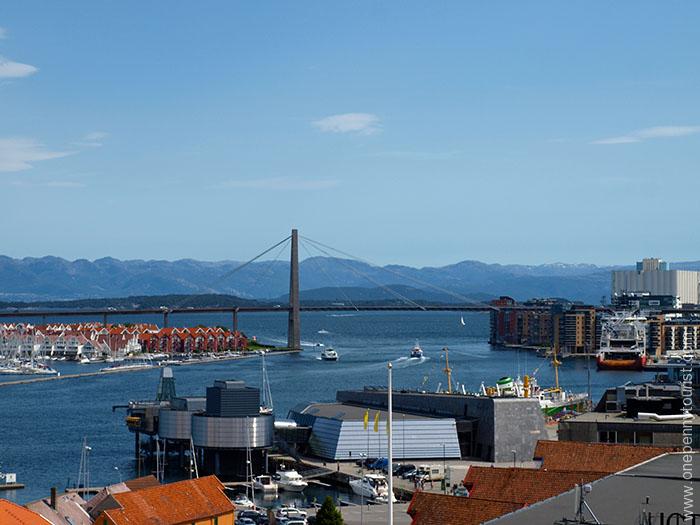 This is the direction we went first thing in the morning. The metallic style building is the Petroleum Museum. Kinda cool it goes out over the water like a rig. 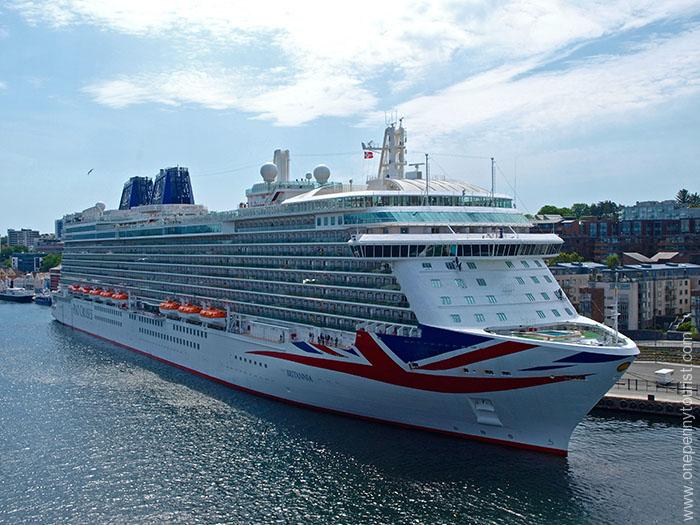 Finally it was sail away time. We got a great view of Britannia as we departed. 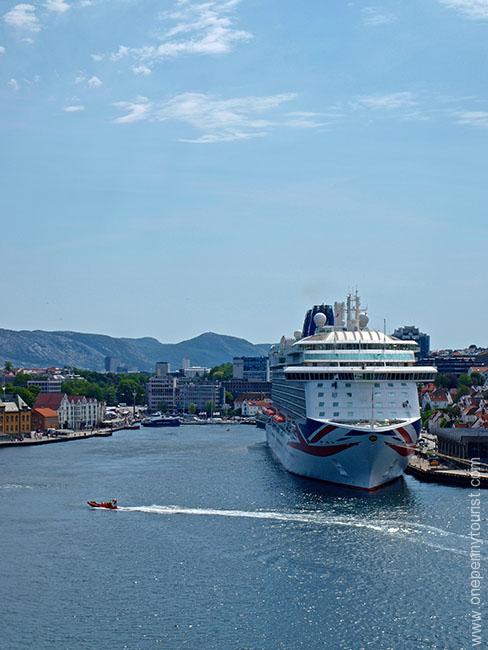 This shot is one of my favourites – looking back at Stavanger, blue skies, mountains and that cosy harbour which plays host to huge cruise ships! 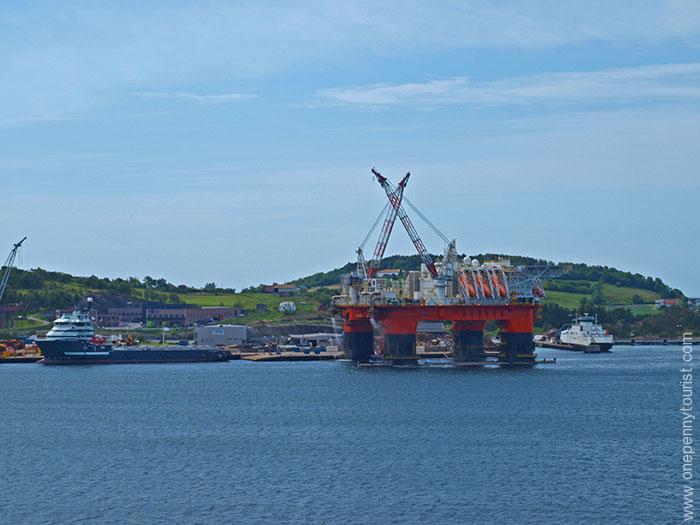 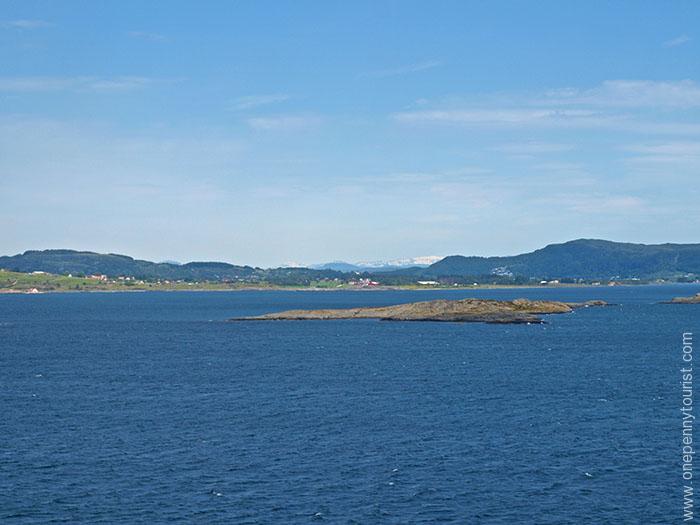 I hope you’ve enjoyed this little whirlwind tour of Stavanger Norway and what it has to offer. It’s a great DIY cruise port to explore if you’re not heading to Pulpit rock.