My Nordic Adventure continues with our first port of call on our Disney Magic cruise and a visit to Oslo. And what a visit it was – with blue skies and sunshine, even the weather seemed to welcome us to Norway’s capital with open arms.

Disembarkation was scheduled for 10:30am. It was nice to sleep in after our busy weekend in Copenhagen so were still enjoying breakfast when the gangway opened early, oops. Our All Aboard time was at 5:45pm, so that meant Oslo in 8 hours – we needed to get moving!

Oslo in 8 hours: Making the most of our day trip 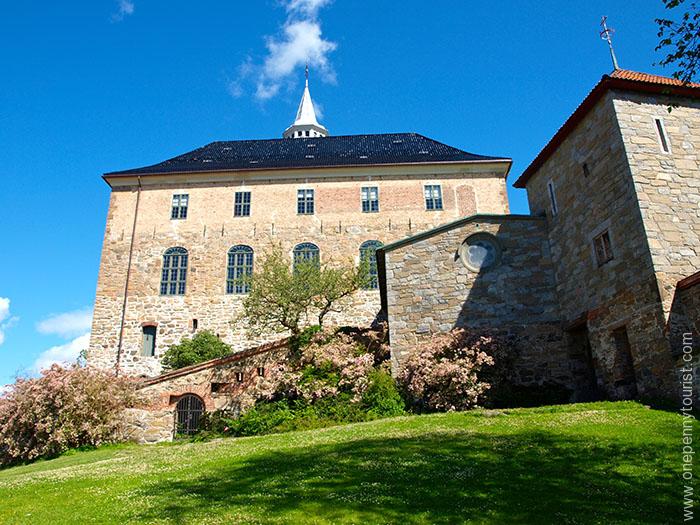 Fortunately our ship docked central to the city, literally next to Akershus Fortress. No prizes for guessing where we were heading first.

Akershus dates back nearly 700 years, and being a fortification it naturally resides on a small hill – this gave us some great shots of the Disney Magic… 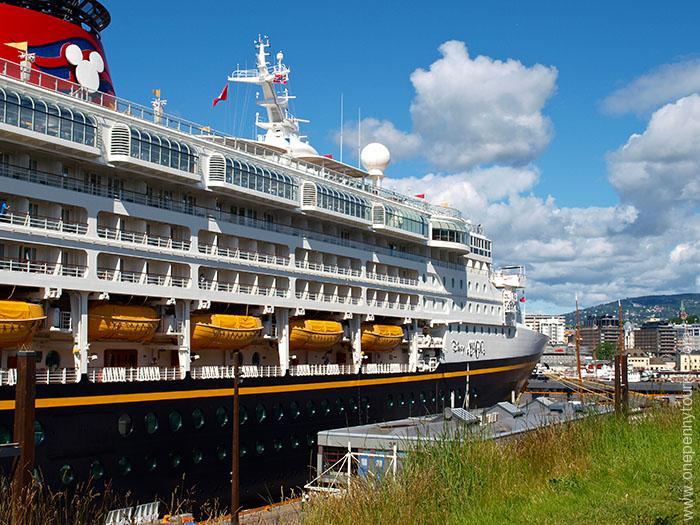 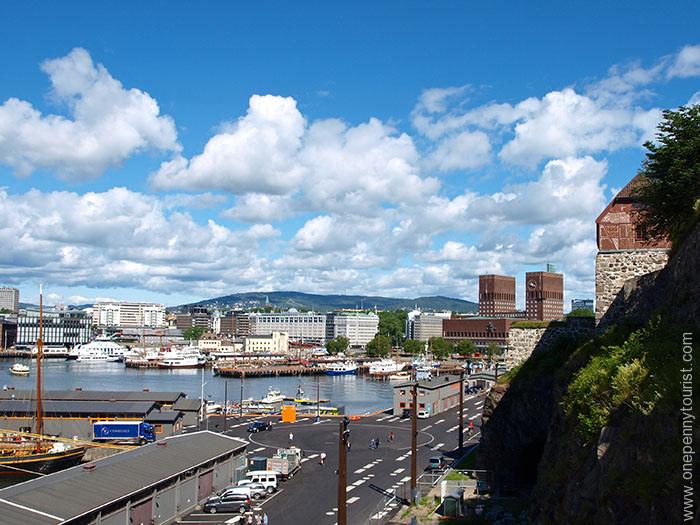 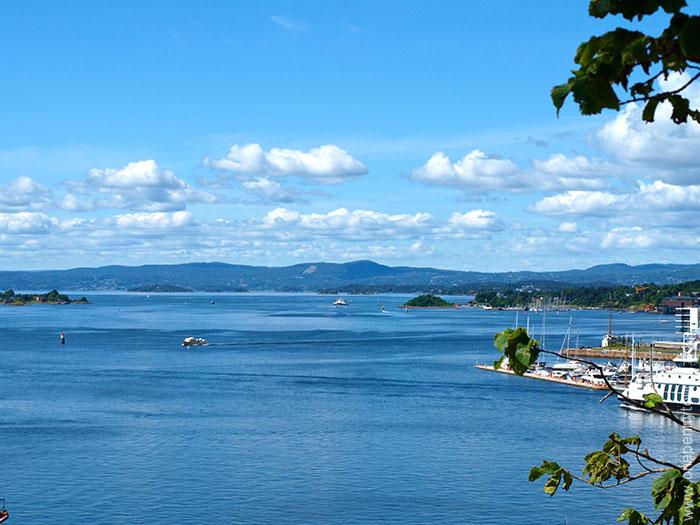 It’s free to wander the Fortress and is well worth a visit as both fortress and views make for some great photos. In fact, I took so many photo’s that I plan to dedicate a future post entirely to beautiful Akershus and it’s grounds.

As we wandered we bumped into a couple of policewomen letting children pet their horses. They were clearly enjoying the fuss – the horses, not the policewomen (though maybe they did too). Sometimes you don’t need to understand a language to know you’re witnessing a ‘feel good’ moment. And yes, I might have stroked one of those velvety noses too. 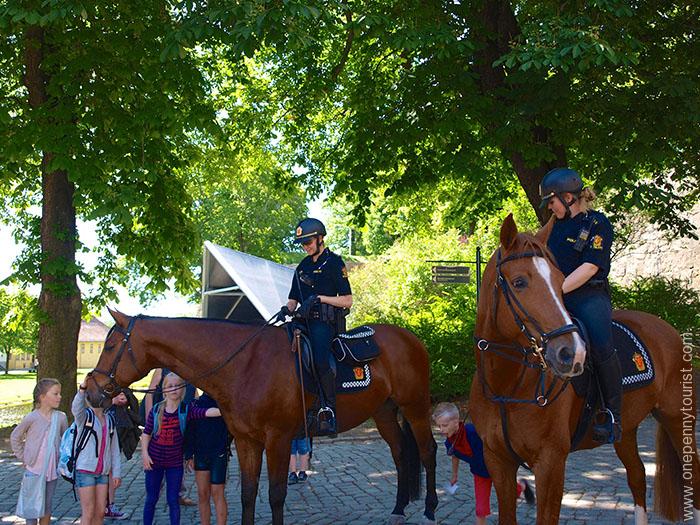 After exploring Akershus we headed along the street for our next photo opportunity which was just a few minutes away. We got some pretty nice views across the water as we walked down the opposite dockside. 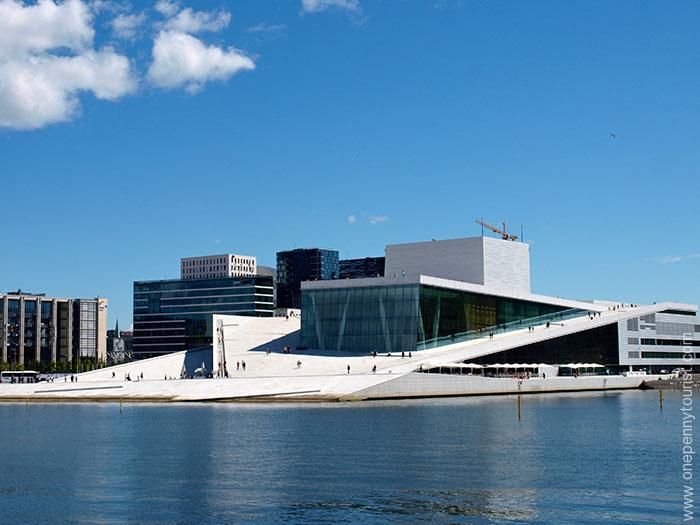 The Oslo Opera House is not just known for it’s performances, but it’s architectural design. The slopes allow you to walk up on to the roof, all the way around and back down the other side. It also descends straight into the water should you fancy a dip! 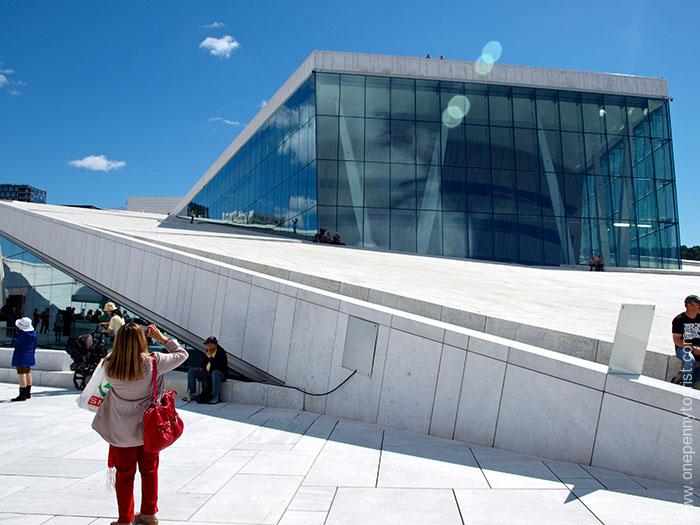 It’s a fascinating building and happily is also free to explore. Obviously we had to go up. 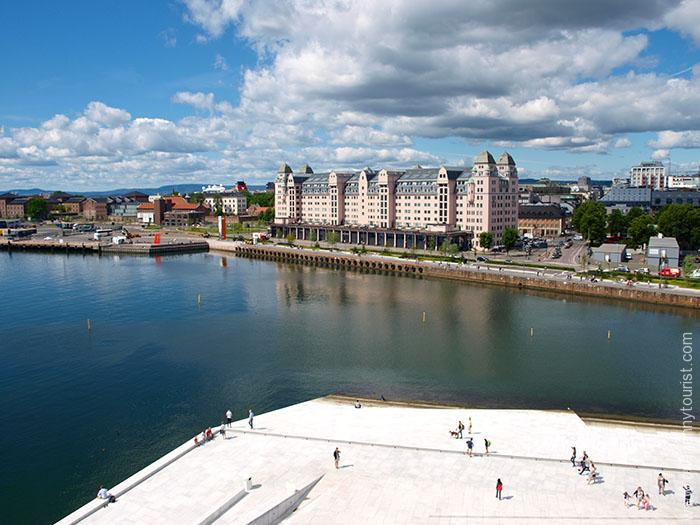 Seeing our ship’s red funnel peeking over the treetops, it birthed my (obviously extremely witty) joke “Hey, I can see my house from here”. I would say this whenever we spotted our ship for the duration of the cruise. Newp, some things don’t get old.

It also gave an alternative view of the sculpture, She Lies that sits in the water beside the Opera House – plus bonus DFDS ship should you ever wonder where they dock. 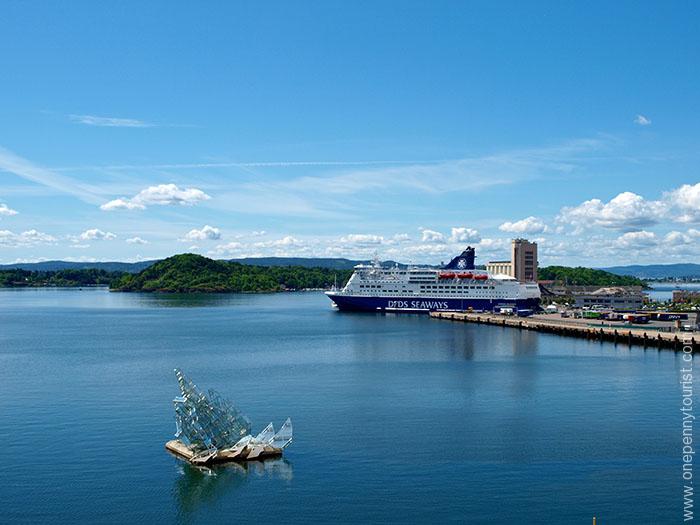 From the opera house we turned inland towards Karl Johans Gate, a long street lined with shops, hotels and restaurants. At it’s end lies the Royal Palace of the Norwegian monarchy. We didn’t walk all the way to the palace ourselves, but you could get up close if you wanted to. Definitely more approachable than London’s Buckingham Palace! 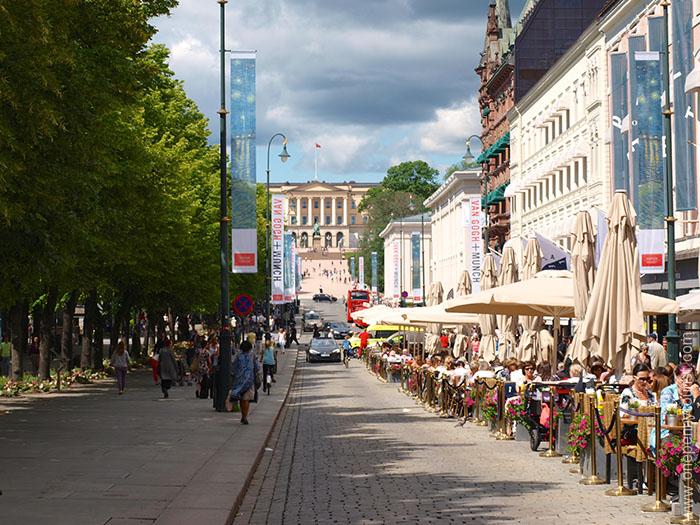 Instead, we found ourselves a bench in the Palace Park to rest our feet, people watch and enjoy the relaxing sound of trickling fountains for a few minutes. 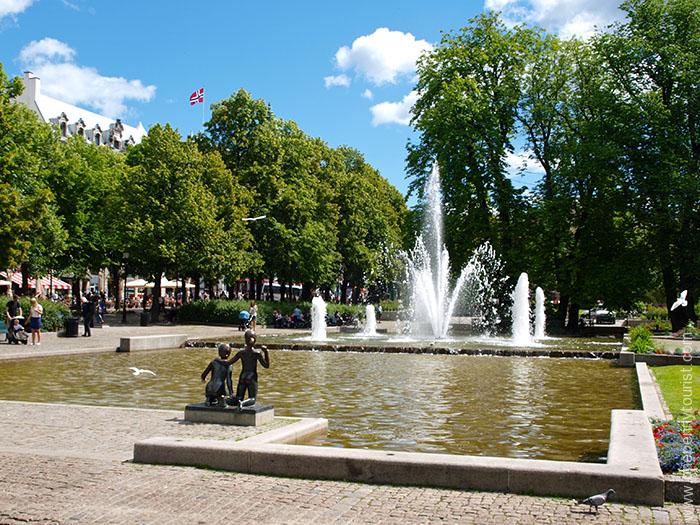 Happy that we’d seen enough, we decided to head back to the waterfront, but this time exploring the opposite side of the inlet we were docked in – the wharf at Aker Brygge. 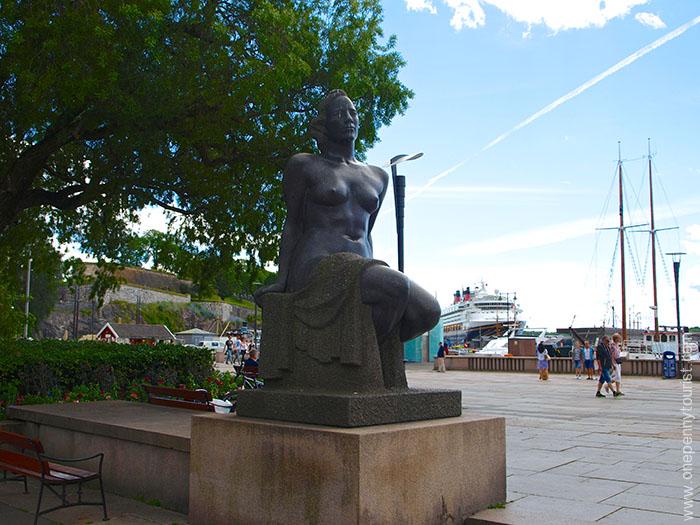 Along the way we found another park to stroll through, this one also had several interesting statues in (Hey, look! I can see my house from here). There was also one of those cute little hop-on, hop-off ‘trains’ running along the waterside promenade. 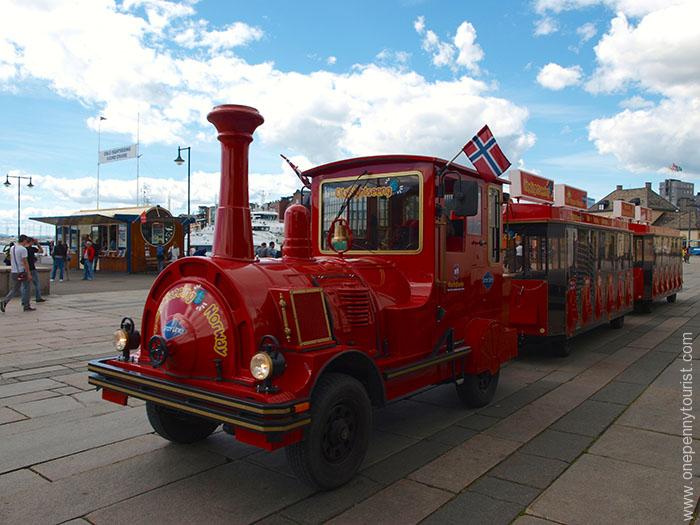 Aker Brygge is a bit of a waterside equivalent to Karl Johans Gate – lined with bars & restaurants. You know you’re there when you find this… 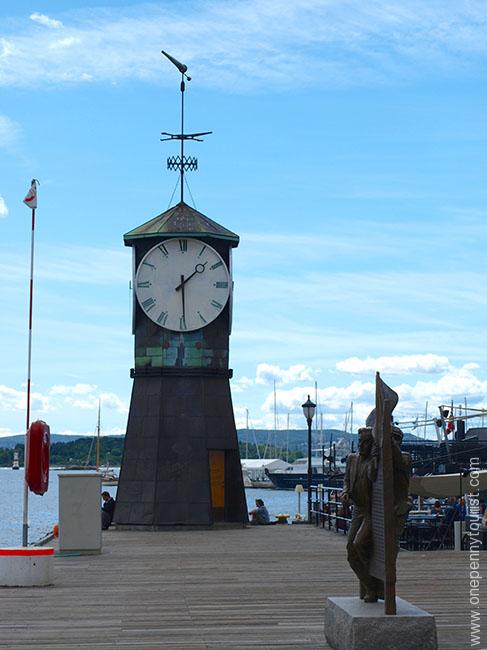 At least this was our view. Hey, I can see my hous…oh, never mind. 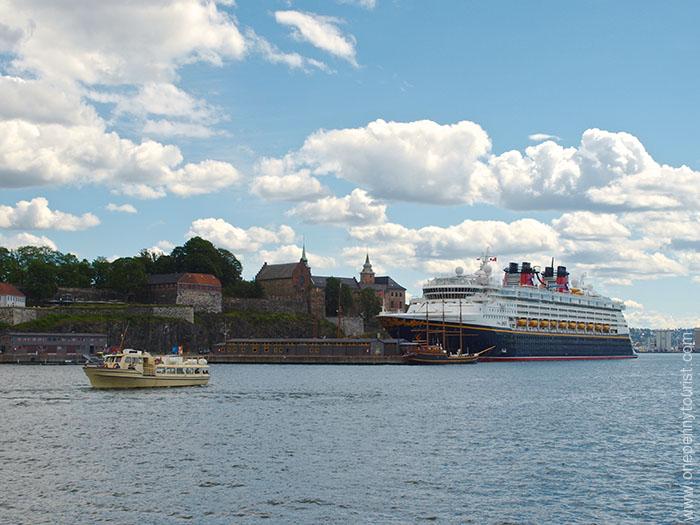 And then it happened. No, we didn’t get served – we left. I can count on one hand the times I’ve given up on a bar or restaurant in my entire life, we are very patient people. Fortunately I don’t let annoyances like this get the better of me or I’d be tempted to name and shame.

Because, you know, that would just make me look bitter. 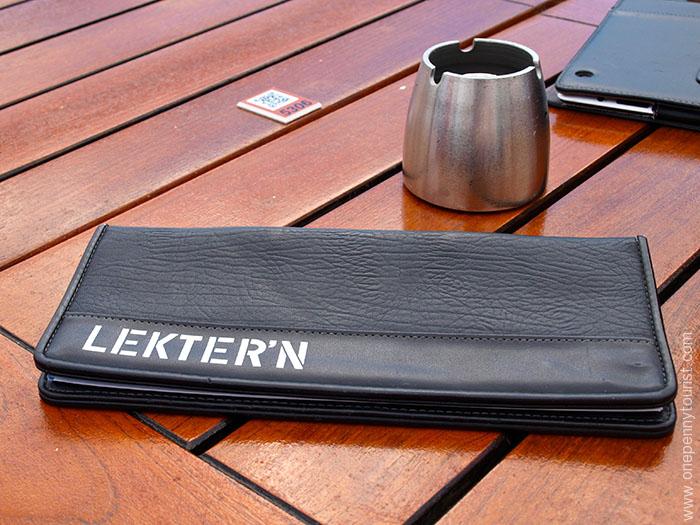 Oh well, at least we got to rest our feet again. More cautiously, we decided to stroll the full length of Aker Brygge to check the other options before deciding where to try next.

Which actually turned out great because at the end we discovered another uniquely designed building – the Astrup Fearnley Museum. Plus found a really cool little beach! This is why I love exploring, you never know what you’re going to find. 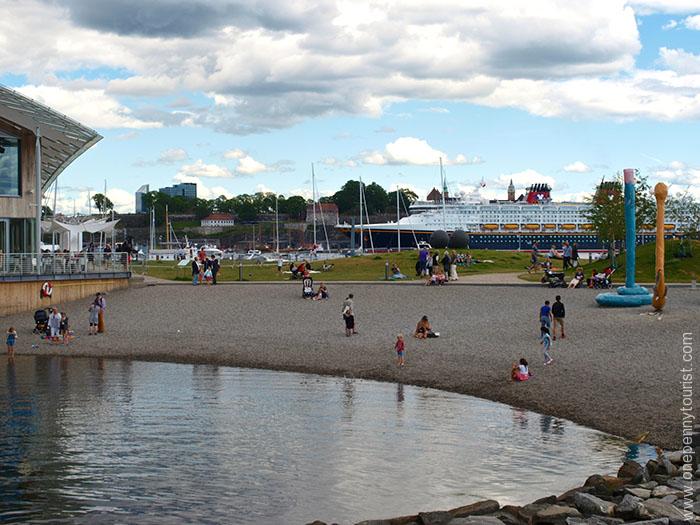 Returning along Aker Brygge we settled on an outside table at Jacob Aall Brasserie (sadly the Oslo branch has now shut), where we were greeted by a friendly server straight away. When she found out we were from the ship across the bay we even had a nice chat with her about our cruise. That’s more like it! 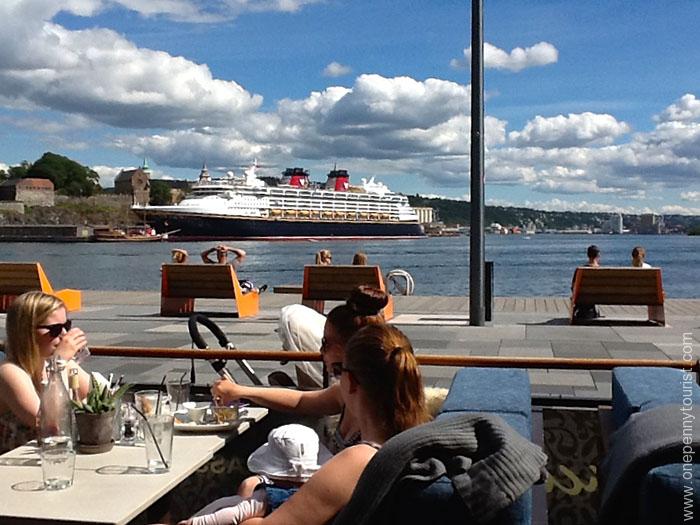 Ahh, perfect. Even if I did burn my arms in the process. Note to self: Sometimes the weather is better than forecast and travel size sunscreen exists for a reason…

After a couple of beers and making the most of another happy surprise there (Hello free wifi) we decided to stroll back to the ship. 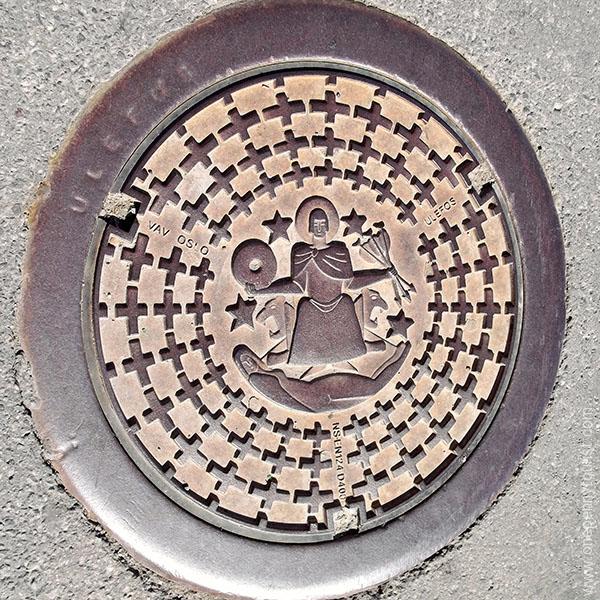 Bloke is very patient with me as I’m always stopping to take photos of weird things (like manhole covers) so when he spotted this sign I was happy to take a snap for his iPad wallpaper. This probably gives far too much away about our household, haha! 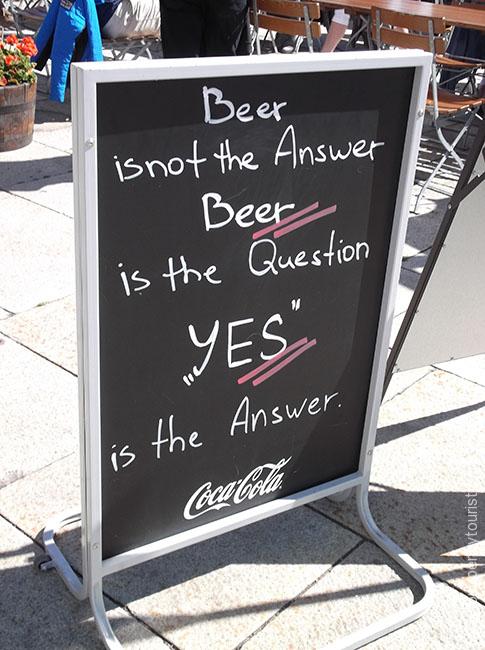 We were back on board the ship and before we knew it, we were sailing away after a brief but lovely visit. We managed to get a taste of Oslo in 8 hours – and thoroughly enjoyed it. 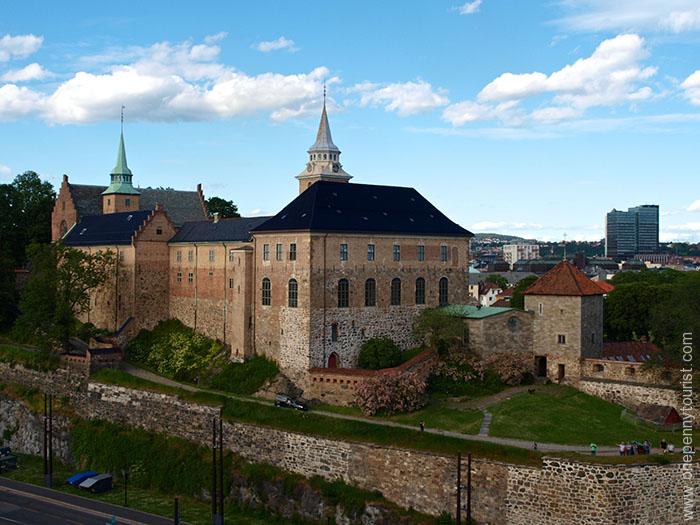 So long Aker Brygge – I forgive you for our one minor grumpy experience in Oslo. 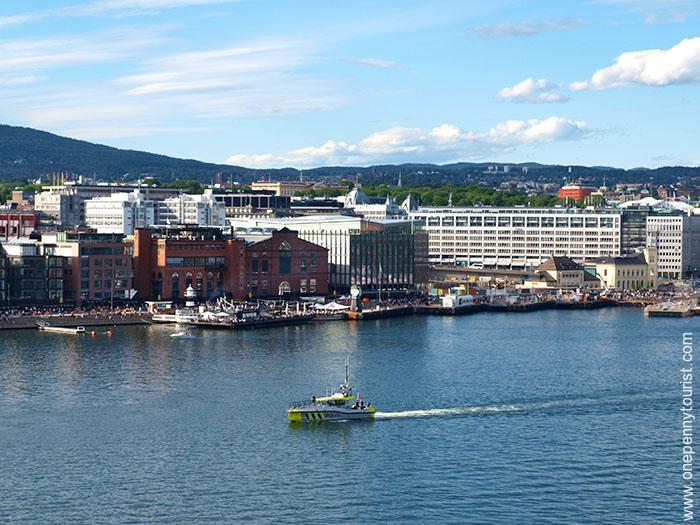 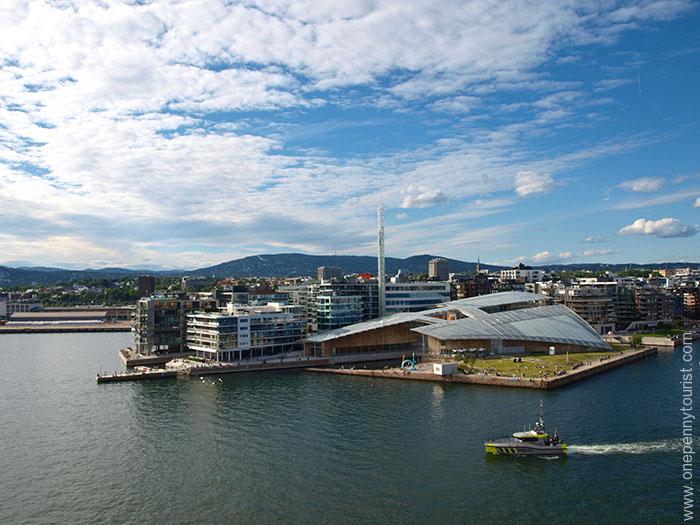 I won’t lie – I was pleasantly surprised with Oslo and liked it more than anticipated. Have you ever been to Oslo? Would you consider a visit now?