In a semi-spontaneous moment on a very grey and gloomy Good Friday, Bloke and I found ourselves in Waterloo – ideal for a walk along the South Bank of the Thames.

You may have already seen that we stumbled on this piece of street art along the way, plus if you’ve read my 5 fun things to do in London this Easter, you’ll also know the Shaun in the City Art Trail has temporarily taken up residence in the city too.

I didn’t have a map of the locations of all the Shaun statues on me (doh!), but I knew there were some in the area so we decided to try and spot them as we wandered.

The South Bank of the Thames – time we explored!

I was expecting the South Bank to be a lot busier as it was a Bank Holiday but I guess the ominous looking weather put people off. Whenever I’ve been to Gabriel’s Wharf previously it’s been rammed with people but it was very quiet that morning. 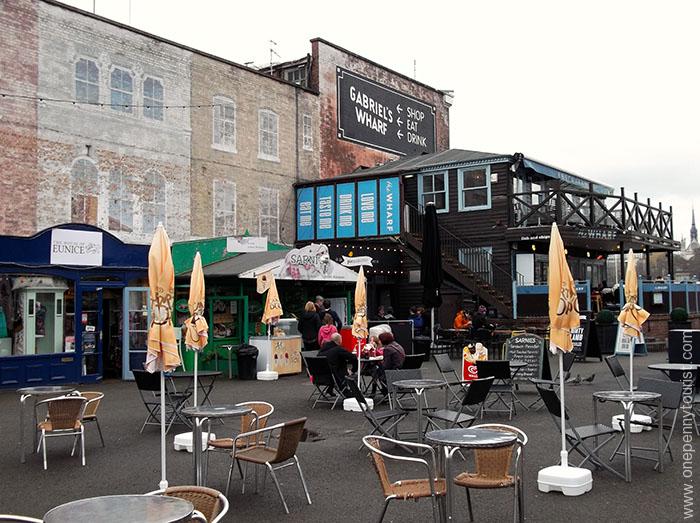 The buskers on the beach were certainly getting some attention, and not just from the geese. 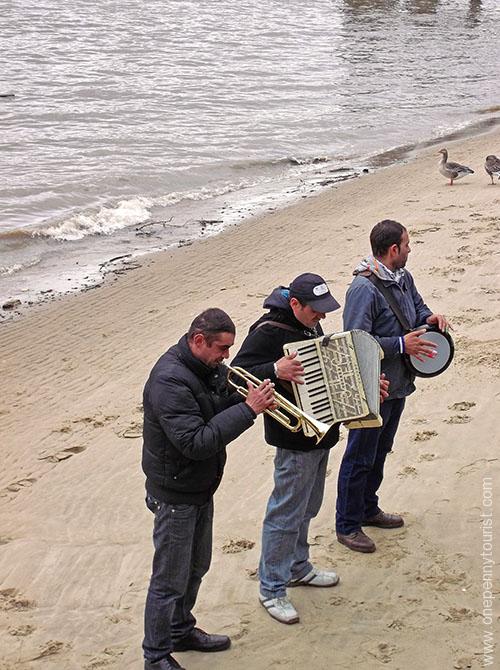 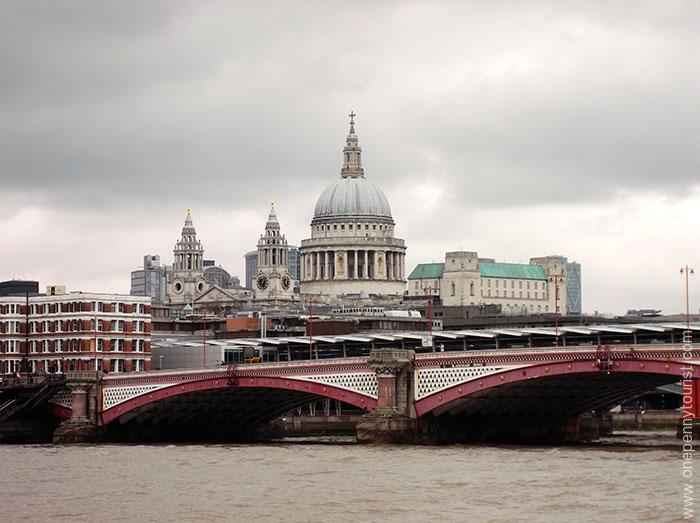 Hurrah, we found our first Shaun the Sheep statue though! 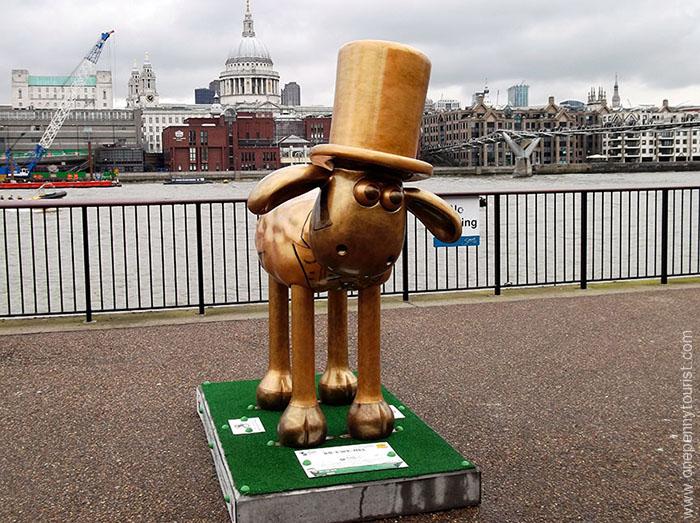 Near the Tate Modern and opposite St Paul’s, Br-ewe-nel was designed and sponsored by the Brunel University, both are named after Isambard Kingdom Brunel.

We kept walking, and It wasn’t long until we stumbled on our next Shaun. I really liked the style of this little guy which coincided with being located outside the Globe Theatre. 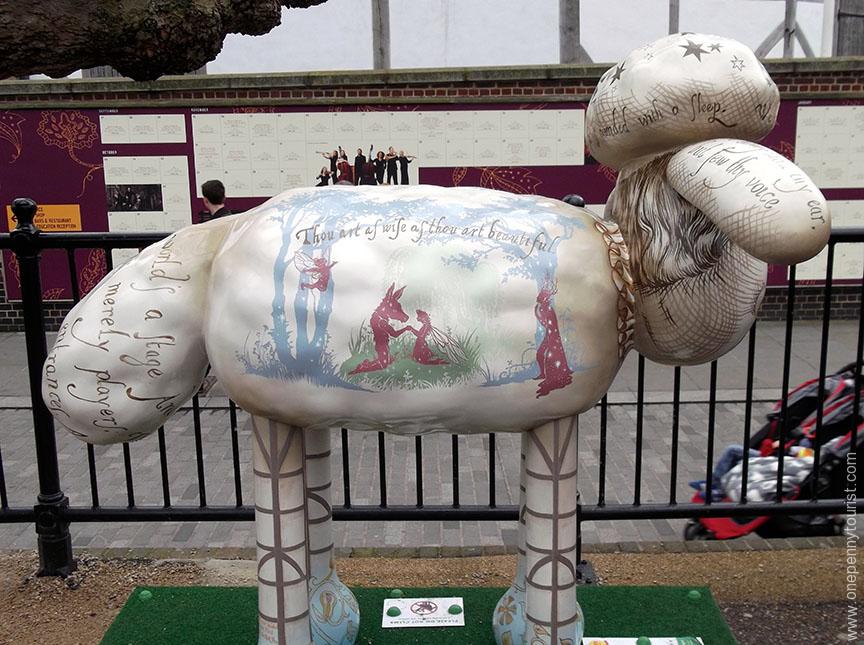 Shakespeare Shaun is titled “To Sheep Perchance to Dream”, was designed by One Red Shoe, I found this cool little time lapse of him being made.

“Mummy, I don’t think this can be Shaun because he has a moustache” – too cute! 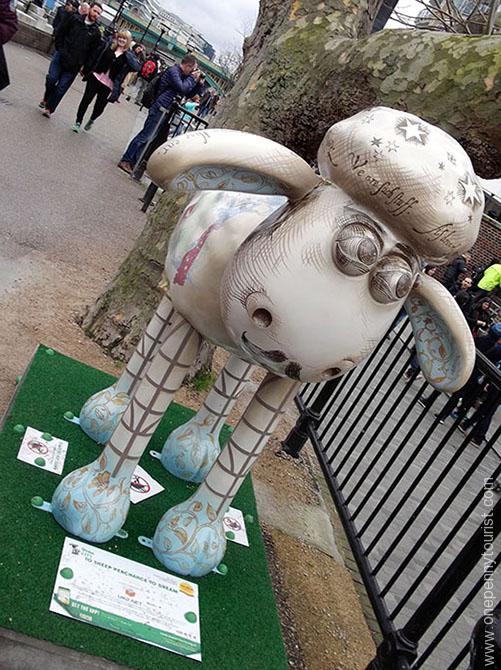 We continued along the South Bank of the Thames by walking down Clink Street past the ruins of Winchester Palace and the replica of Sir Francis Drake’s famous Golden Hind. 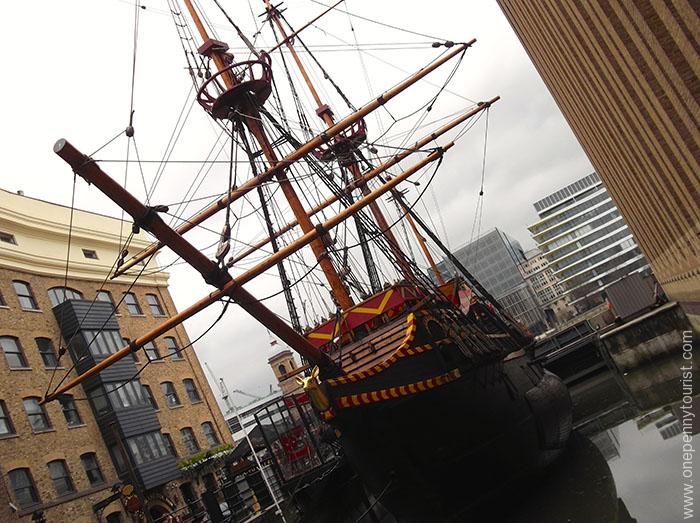 It wasn’t too long before we found another Shaun. This time it was Mittens, designed by Simon Tofield who writes the children’s cartoon “Simon’s Cat“. 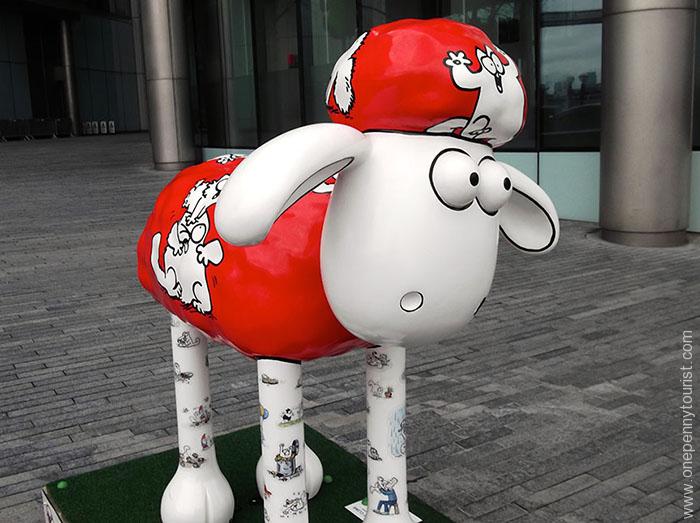 A stones throw away was also PETAL who was designed by illustrator Emily Ketteringham. 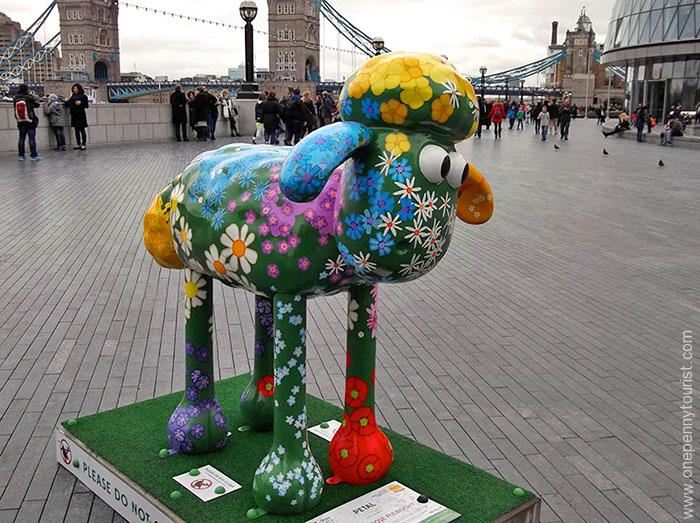 It was after seeing PETAL that I heard what sounded like an alarm going off…baffled for a moment, I turned to Bloke and said “Is Tower Bridge opening?!!!”. I’ve lived in London my whole life but somehow I have never seen this – I know, I don’t know how either.

Don’t laugh, we all have to start our video career somewhere, right? Haha. Seriously though, I am now inspired to do more video in future and a GoPro is on my Birthday wish list.

Update: In the end I bought the basic GoPro HERO

from Amazon.co.uk (on Amazon.com it’s the this one

(affiliate links)). Will report back on how good it is after my Nordic cruise!

We decided it was time to leave the South Bank of the Thames and head north via Tower Bridge. Midway across the bridge we found this guy.

Globetrotter Shaun was created by Sarah Matthews, a designer at Aardman Animation who are the creator’s of Shaun the Sheep. 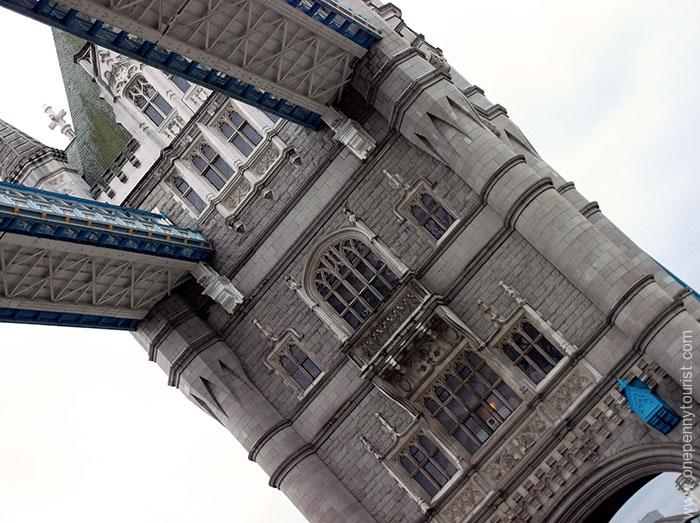 You can actually go up the top of Tower Bridge and walk along the ramparts as part of the Tower Bridge Exhibition. I’ve never done it myself, it’s on the ‘to do’ list for one day though.

We finally decided it was time for lunch. Traditionally we always have fish on Good Friday – which in our world translates to fish and chips, so we headed to St Katherine’s Dock and the Dicken’s Inn for our pub lunch. 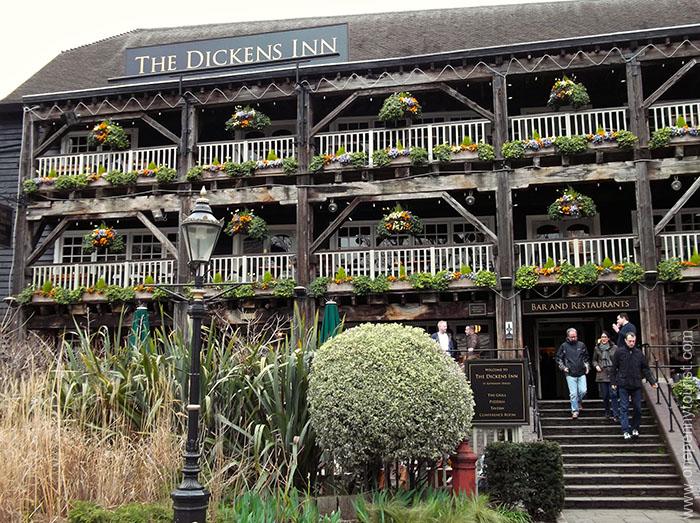 It’s a bit of a tourist trap (with tourist trap prices), but it’s a pretty area, even when gloomy – you just have to suck up that sort of thing up sometimes. We refuelled with a traditional Good Friday lunch of fish, chips, mushy peas and uh, beverages. 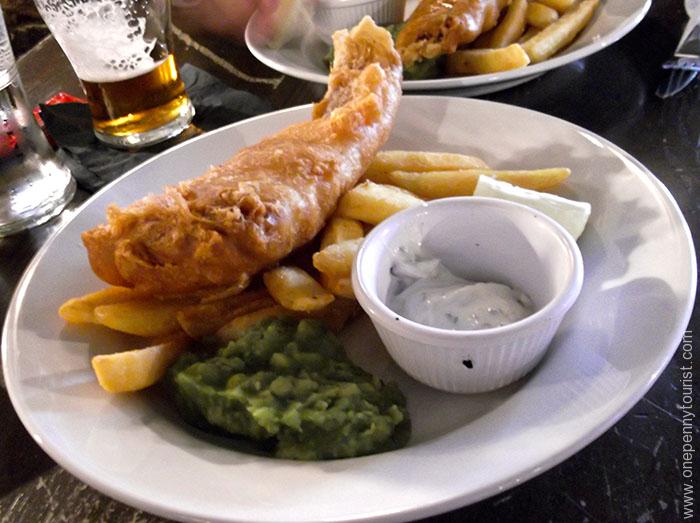 After our pub pitstop we headed along the cobbled streets outside the Tower of London on the hunt for…you guessed it, more sheep. 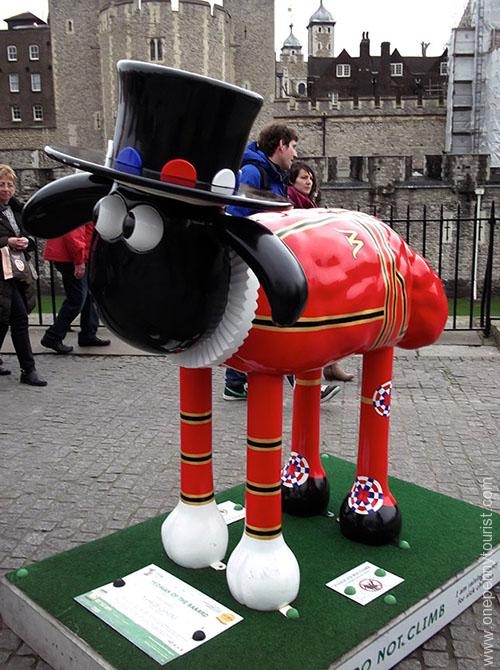 Yeoman of the Baaard is designed by Vivi Cuevas – a Chilean artist, now living in Bristol.

It’s a two-for-one at the Tower as very close by is also Shaun-Xiao by Stephen Taylor and this Shaun has an interesting story behind it’s design. 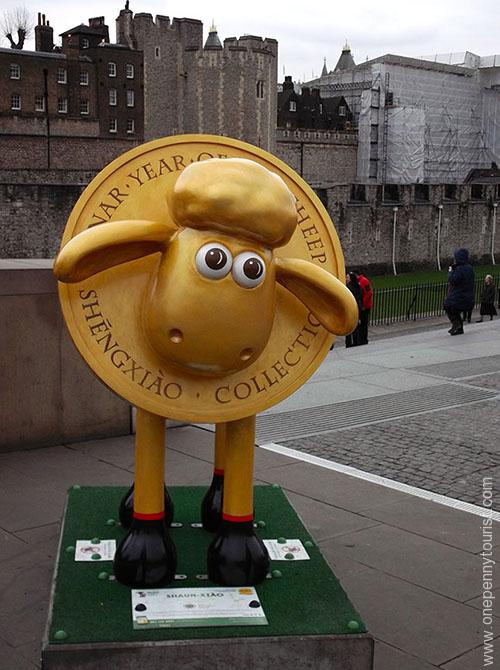 It’s sponsored by the Royal Mint which was originally based at the Tower of London for over 500 years. They have started minting a series of coins celebrating the Chinese New Year called The Shengxiao Collection and 2015 is the Year of the Sheep – so it’s very fitting.

After a lot of walking, our discovery of sheep had finally ended for the day. After stopping off for another quick drink in a pub (big mistake, it finally started raining while we were in there, grr), we decided it was time to jump on the bus and head home.

Despite the weather, we’d had a great day along the South Bank of the Thames and around the Tower of London. I’m looking forward to going on the hunt for some more Shaun in the City statues before the Art Trail finishes on May 27th 2015.

If you enjoy exploring, I think you’ll also enjoy my Hidden Secrets post with plenty of London trivia to keep you entertained. If you need to find the best way to travel around the city, I also have also written a handy guide to London transportation tickets.

Part of the Travel Tales link up

and part of the Brilliant blog posts link up