There are many artists who display their work on buildings and walls throughout my home city – sometimes their art is prominent and sometimes it’s small or tucked away in a quiet street. The Dalston Peace Mural is anything but small and tucked away.

I prefer to travel by bus as it’s more interesting to look out of a window rather than take the Tube in darkness, so I’ve seen this view many times as I’ve passed by during my daily work commute. It dominates the entire side wall of a 4 story end of terrace building.

Illustrating the Hackney Peace Carnival of 1983 the painting contains strong suggestions of social tolerance along with anti-nuclear, anti-war and ecological messages. This was part of a ‘Year of Peace’ initiative happening at the time – but there’s more it’s story than that.

Ray Walker, the original artist died before the work was produced and so instead completed by his friend Mike Jones, and widow Anna Walker. Thus the mural is also a memorial too.

Completed in October 1985 (yes, this local landmark is nearly 30 years old) and located on Dalston Lane, the mural is virtually impossible to miss as you drive eastbound or if arriving by train at Dalston Junction Overground station (If you’ve read my Oyster Card vs Travelcard guide and are wondering, this station is located in Zone 2).

However it’s not always been certain that the mural would survive after years of neglect, especially when the building was itself under threat of demolition. In 2010, after local pressure it’s future improved when Hackney Council purchased the Freehold to the building. In 2013 they reaffirmed their commitment to protect the mural in the long term.

In the summer of 2014 the Dalston Peace Mural was finally restored to it’s former, colourful glory. This was from a combined effort of Hackney Council, new landlords and the drum and base band Rudimental, who donated after featuring the mural on their debut album Home.

It’s pretty cool – if you’re ever in the area, be sure to check it out. 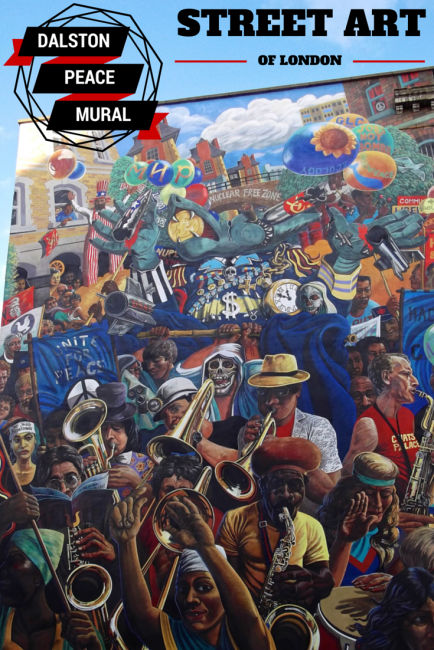